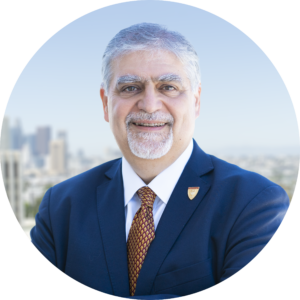 Vassilios Papadopoulos, DPharm, PhD, DSc (hon), was named dean of the USC School of Pharmacy in fall 2016. Before joining USC, he served as executive director and chief scientific officer of the Research Institute of McGill University Health Centre in Montreal, and as faculty, department chair and director of the Biomedical Graduate Research Organization at Georgetown University Medical Centre.

A noted scientist and innovative leader, Papadopoulos has published more than 350 papers, holds numerous patents, serves on many national and international advisory committees and boards of biotechnology companies as well as a consultant for the pharmaceutical industry. He is an elected foreign member of the National Academies of Medicine and Pharmacy in France, fellow of the American Association for the Advancement of Science, fellow of the American Association of Pharmaceutical Scientists and fellow of the Canadian Academy of Health Sciences.

Papadopoulos’ research focuses on understanding the cellular and molecular mechanisms responsible for the initiation and maintenance of steroid biosynthesis in the adrenal, gonads and brain, in health and disease. He also examines the regulation of steroid biosynthesis, intracellular compartmentalization and homeostasis by hormones, chemicals, drugs, natural products and environmental factors. His research has direct applications in reproduction and development, aging, cancer, and neurological and neuropsychiatric disorders.