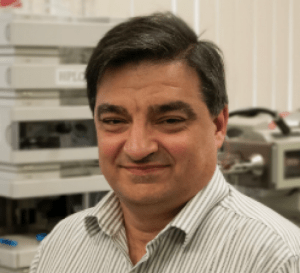 Julio A. Camarero started his studies in chemistry at the University of Barcelona (Spain), received his master’s degree in 1992 and finished his PhD thesis there in 1996. Afterward he joined the group of Prof. Tom W. Muir at The Rockefeller University as a Burroughs Wellcome Fellow where he contributed to the development of new chemoselective ligation techniques for the chemical engineering of proteins. In 2000, he moved to the Lawrence Livermore National Laboratory as a Distinguished Lawrence Fellow, where he became staff scientist and head of laboratory in 2003. He joined the University of Southern California in 2007 as an associate professor.

His current research interests are focused in the development of new bioorganic approaches using protein splicing and synthetic protein chemistry for studying biological processes involved in bacterial pathogenicity and how can be modulated or inhibited by small molecules. Camarero has authored over 40 peer-reviewed publications and four invited book chapters.