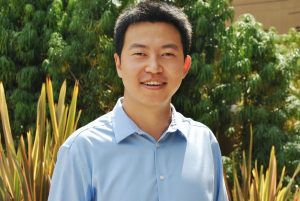 Yong (Tiger) Zhang received his BS in biological sciences from Shandong University in 2003 and his MS in biophysics from University of Guelph in 2006. He earned his PhD in biochemistry with Prof. Vern L. Schramm at Albert Einstein College of Medicine in 2011. His doctoral research was focused on the enzymatic transition state and catalytic mechanism for rational design of potent enzyme inhibitors as antimalarial and anticancer drugs. Zhang received postdoctoral training with Prof. Peter G. Schultz at the Scripps Research Institute and California Institute for Biomedical Research (Calibr) from 2011 to 2014. His postdoctoral work established a versatile approach to the generation of novel antibody chimeras with excellent physical, biological and pharmacological properties for drug development. Zhang joined the faculty of the Department of Pharmacology and Pharmaceutical Sciences at the USC School of Pharmacy as an assistant professor in December 2014.