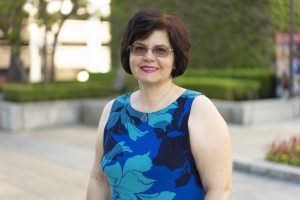 Liana Asatryan earned her PhD in biochemistry from the Institute of Molecular Biology, National Academy of Sciences of Armenia. Asatryan has also completed the Graduate Certificate in Clinical Research Design & Management in Regulatory Science at USC. Currently, she serves as a research assistant professor in the Titus Family Department of Clinical Pharmacy at the USC School of Pharmacy, and director of the Clinical and Experimental Therapeutics program.

In addition to her research responsibilities, Asatryan lectures in the undergraduate and MS in Management of Drug Development degree programs within the Regulatory Science program at the USC School of Pharmacy.