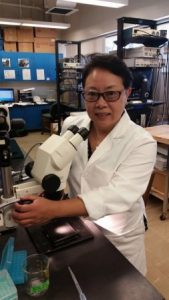 Liang led her team in identifying a flavonoid compound dihydromyricetin (DHM), purified from herbal medication—Hovenia—as a candidate for medication for Alzheimer’s disease. Her team found that DHM has a high efficacy on Alzheimer’s disease compared with Food and Drug Administration–approved medications such as Memantine. DHM can restore functional GABAergic synapses as well as improve recognition and memory/learning abilities. Based on a World Health Organization 2016 report, the worldwide prevalence of Alzheimer’s was estimated to be 26.6 million in 2006, and an estimated 107 million individuals worldwide are expected to have the condition by 2050. Therefore, this development provides hope for people who are suffering from cognition/memory loss and Alzheimer’s disease or other dementia. Liang’s team also identified the Gephyrin-GABAAR pathway as a new mechanism/molecular target for treatment of central nervous system disorders including Alzheimer’s disease, dementia and Parkinson’s disease.