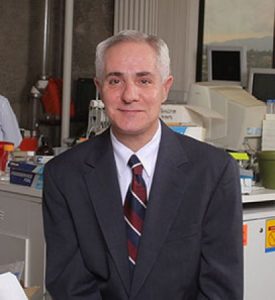 Enrique Cadenas, MD, PhD, researches the molecular mechanisms inherent in brain aging and Alzheimer’s disease under an umbrella that characterizes and evaluates quantitatively the decline in energy metabolism associated with brain aging and age-related neurodegenerative diseases by addressing the coordinated regulation of signaling and transcriptional pathways and mitochondrial function. This coordinated triad is critical in the regulation of brain glucose uptake and metabolism. This platform has been used to assess the therapeutic potential of several nutritional approaches that restore mitochondrial function and the associated signaling and transcriptional pathways as well as cognition (evaluated as long-term potentiation).

Cadenas’ lab has ample expertise on mitochondrial bioenergetics, dynamics and biogenesis, redox signaling and redox modulation of transcriptional pathways as well as free radical biology and nitric oxide biology inherent in aging and age-related neurodegenerative disorders. In addition, his laboratory is engaged in the analyses of protein post-translational modifications associated with modulation of cell signaling as well as the ability to assemble and integrate comprehensively mitochondrial physiology and cell signaling and transcriptional pathways.

Cadenas also collaborates extensively with international investigators focusing on modulation of nitric oxide concentration dynamics following hippocampal neuronal glutamatergic activation and hippocampal mitochondrial dysfunction in aging. This is part of a research program with the University of Coimbra, Portugal, that addresses the significance and regulation of the neurovascular-metabolic coupling axis in brain aging and Alzheimer’s disease.