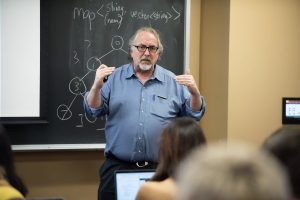 Daryl Davies is associate dean for undergraduate education and a professor in the Titus Family Department of Clinical Pharmacy at the USC School of Pharmacy. As associate dean, he is responsible for the ongoing development and management of the school’s undergraduate majors and minors. Davies is also the director of the master’s program in management of drug development in the Department of Regulatory and Quality Sciences and undergraduate faculty adviser for the Trojan Admission Pre-Pharmacy (TAP) program. He is a mentor in the STAR program—a cooperative venture in science education between the USC Health Sciences Campus and Francisco Bravo Medical Magnet High School in East Los Angeles—after several years serving as the program’s director.

In addition to his educational activities, Davies leads a research team at USC that is working to discover and develop novel therapeutics for the treatment of neurodegenerative diseases and alcoholism. He is considered a pioneer by his peers in the field of purinergic receptors and their role in central nervous system regulation of alcohol-induced changes in alcohol intake and signaling. He also is one of the lead faculty members in the USC Institute for Addiction Science.

Davies is a firm believer in using an interdisciplinary approach. To this end, his group works with a team of collaborators that use a combination of pharmacological, toxicological, electrophysiological, molecular, computational chemistry, molecular modeling and regulatory expertise to discover and develop new drugs.