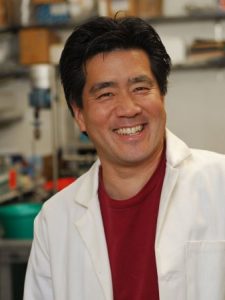 Curtis T. Okamoto received his PhD in physiology from the University of California, Berkeley, in the laboratory of John G. Forte, PhD. He received his postdoctoral training at the University of California, San Francisco, in the laboratory of Keith E. Mostov, MD, PhD. He is currently an associate professor in the Department of Pharmacology and Pharmaceutical Sciences at USC.