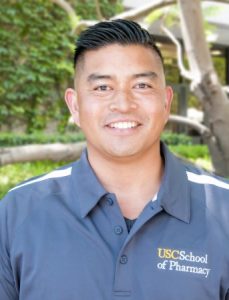 Angel P Tabancay Jr joined the faculty at the USC School of Pharmacy in July 2015 as a Lecturer in the Department of Pharmacology and Pharmaceutical Sciences. His primary teaching responsibilities lie in the PharmD program. In the P1 year, he coordinates and teaches in PHRD 503 (Biological Systems I) and PHRD 504 (Biological Systems II). In the P2 year, he co-coordinates a therapeutics module, PHRD 572 (General Medicine Therapeutics). He also teaches and coordinates a P2 elective course, PHRD 555 (Pharmacy Education I) and PHRD 556 (Pharmacy Education II) targeting students that have an interest in pursuing a career in academia or completing an Area of Concentration in Education. In the P3 year, he teaches and coordinates PHRD 636 (Scholarly Project 3) that supports third year students as they complete their Scholarly Projects and prepare to present their work at the annual Pharmacy Scholarly Project Symposium in March.

Dr Tabancay also teaches in graduate courses as part of our growing MS program in Pharmaceutical Sciences. He teaches about Drug Transporters in PSCI 501 (Drugs: Principles of ADME and Bioavailability) and Anticancer Agents in PSCI 502 (Principles of Therapeutic Mechanisms). In the Spring, he coordinates and teaches in PSCI 503 (Principles of Research Methodology).

Dr Tabancay received his BS in Molecular, Cell, and Developmental Biology in 1998 from the University of California, Los Angeles. He earned his PhD in Microbiology, Immunology, and Molecular Genetics in 2004 from the University of California, Los Angeles under the guidance of Fuyuhiko Tamanoi.  His PhD dissertation entitled “Genetic approaches to the study of Rheb GTPase” utilized the model organisms, Saccharomyces cerevisiae and Schizosaccharomyces pombe, to elucidate Rheb’s function in arginine uptake and nutrient sensing. After receiving his PhD, he pursued his postdoctoral training in the lab of Susan L Forsburg at the University of Southern California. He further utilized the model organism, Schizosaccharomyces pombe, to investigate the role of the SPN/FACT complex in eukaryotic DNA replication. Dr Tabancay’s current research interests lie in the fields of pharmacy education, signal transduction pathways leading to cancer, DNA replication, and the use of model organisms to study human diseases.